I had a recurring nightmare as a child. It woke me in the middle of the night and kept me awake worrying about whether it would fill my mind as soon as I closed my eyes. I thought I would outgrow it. I hoped my adult brain would be able to see things my child’s brain couldn’t and I would be free. Instead, a panicky fear of my Dad dying followed me into marriage and parenting. I’m 49 years old and until recently, the nightmare still showed up in various forms.

This year my beloved Daddy died. I watched him take his last breath in front of me and imagined him arriving with the next in heaven. My whole life I’ve been clenched up around the fear that watching him die might break something inside of me and I couldn’t survive. 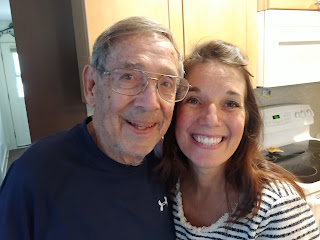 It didn’t happen. I’m more okay than I ever thought possible. My dad isn’t living anymore, he’s not here on earth for me to talk to or touch and I’m sitting upright and in my right mind. Today I’m amazed at my okayness. Finally being free of this fear I’ve lived with so long feels like one of the biggest miracles of my life.

The very thing I’ve been in fearful bondage to, my Dad’s death, is what brought 20/20 vision to why I've been afraid so long. Today I can see how God and my Dad had been linking arms the whole time to make sure I would thrive.

Let me tell you the story of how I got free. And how you can be free from your fear too. It all starts with my Dad. The best way to honor my Dad’s way of living is to pass on to you my “Lessons Learned” from the week I watched him go to heaven.

Soon after my first son was born and my Dad became a Grandpa, he began writing his life story. Each Christmas for the next couple of years, my sister and I received an installment of his book, Reflections: A Chronicle of Events and Perspectives Recalled by John M. Smith. Handwritten on the front page of my copy are the words, “To Lori, Scott, Riley & Trevor - My life story, written for you. Hope you enjoy it. Love Dad/Grandad 12/25/1997. He gave us the last installment in 2011 and brought the finished page count to 300.

In the forward, he explained his intent, in my Dad’s classic style. He wanted his grandchildren and great-grandchildren to be able to become acquainted with their Grandad in a personal way even if they were unable to know him or remember him. He felt they should be able to find out who he was, where he came from, what he thought about life. He also wanted to give my sister, mom, and me a view of what growing up was like for him.

His last, most poignant purpose was for his own benefit in the future. Dad wrote about wanting to be able to remember certain things when time started to dim his memories. Dad’s brother Roy, who was twenty years older than him, began to be overtaken by dementia soon after Dad began writing. Dad’s own dementia diagnosis came less than twenty years later. 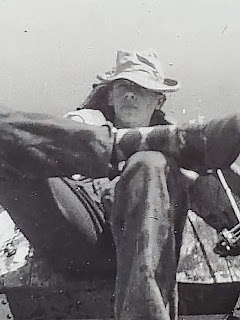 As things began to get fuzzy for Dad, reading his own words back to him became the thing that brought him the most joy and comfort. We read his stories and Dad listened intently. Every now and then he would exclaim, “By golly, that’s right! I’ll never forget that!” or “How did you know about that? Did it happen to you too?” One of Dad’s recurring questions during his illness was to ask me if I had gotten started on my own memoir journal yet. That question never stopped popping up, even near the end. He made it clear he believed it would be good for me as well as my children to get started writing.

Dad organized his stories chronologically but paused with a bold pop-out every so often titled “Lessons Learned.” Here he offered a condensed lesson he learned from the life experience he had just retold in his memoir. It’s like he put a hand on the reader’s shoulder and leaned closer to say, “Don’t miss this. It’s an important piece of my life and is a lesson you need too.” They were things like:

Lesson Learned: When driving, be alert to everything around you, including what is happening behind you. With experience, you learn to spot situations that could easily turn into something dangerous to you and your passengers. This is your responsibility as the driver.”

Lesson Learned: Not everyone has the same strength. It’s important to find yours, develop it, and use it. Don’t be impatient with those that can’t do something as easily as you can. Remember they have their strengths, which you may be deficient in.

I’ve come to think about life in a “lesson learned” format. You tell the story and then boil it down so the reader can’t miss the lesson. So here’s "lesson learned" gift to you.

My self-image has always been heavily influenced by whether I can make a select group of people in my life proud of me. My parents are the epicenter of this group. Maybe because my Dad and I shared such similar personalities, his thoughts and opinions of me have always been the anchor around which I see myself.

Those recurring nightmares of my past were always centered on my dad’s death. I’ve never been able to shake the crazy panic I felt as a little girl if I ever imagined my life without him in it. I’ve also never understood why this panic has such a hook into me.  It was powerful, about more than loving my dad and not wanting to live without him. I lived with a vague panic that my world might actually implode without him in it. 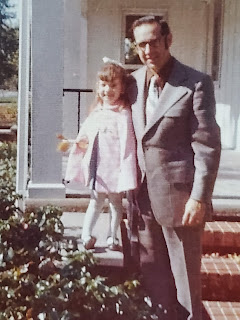 My dad was 37 years old when I was born. I always knew he was older than most of my classmates’ dads. A child of the depression, he took the provider/caretaker role in our family very seriously. He planned and saved and ran spread-sheets my whole life that centered on making sure Mom would be taken care of when he was gone. So it makes sense that I lived a little hyper-aware of his death. It was the intense panic I didn’t understand.

Dad's dementia diagnosis in his early seventies and his quick decline this year pushed me to face my panic head-on. As an adult, I’ve tried to understand this panic and find its root, but always with the hope I had loads of time left to figure it out. This January, it clearly became time to unravel the thing holding me so tightly in its grip. A bigger fear started to supplant the familiar one of him dying - me facing his certain death on shaky ground.

As I began to think and pray, my fear started to come out of the shadows and take shape. Pieces of it were about missing my dad’s physical presence with his soft face and special wink reserved only for his girls. It’s core shape though, was the fear that without his physical presence I might become untethered to all the things that make me feel settled in my skin. That the only vision of myself that’s ever been clear to me is the one I see reflected in his face. That I won’t know who I am without his voice telling me.

But guess what? My dad’s soul left for heaven four months, one day, and about fourteen hours ago and I haven’t dissolved into a pile of nothing yet. I’m more okay than my fear ever let me think was possible. I’ve weathered the scariest thing in my life and imagination better than I expected to because of the “Lesson Learned” God is teaching me right now.

Lesson Learned: The security you found in your dad’s opinion of you was an important part of God’s plan, but not all of God’s plan. The things your dad gave you were a downpayment on the things God, your good Father is giving you now. Your dad carefully stewarded your self-worth and in ways invisible to you, has been carefully handing the baton back to God. More of how you see yourself is currently resting in how God sees you than you realized. This is why you are okay.

Next Wednesday - same time, same place, and I’ll finish the story and hand you the key to freedom I found.

July 06, 2020
We ate steak at the fanciest place in town, me and my sister, our husbands, and our parents. Around the table, we joined Mom’s reminiscing. We retold our favorite stories of family vacations and holidays. We revealed some silly childhood secrets. And we listened to Mom’s stories from fifty years she and Dad spent together. One of our favorite stories is of the birthday Mom expected a diamond ring but went home from their swanky dinner with a shiny new set of hot rollers. Whenever Mom tells that story, instead of making fun of Dad for his slow-moving ways, she praises his serious, methodical decision making. She points to it as proof of his dependability.My mom told stories. I told stories. My sister told stories. Even our husbands had memories to share. We retold some of the stories Dad put on paper in his journal for us. The thing we missed most was Dad’s voice in the storytelling.Rather than telling the stories himself, he locked eyes on the teller and responded, “By golly, that hap…
2 comments
Read more

A Cup of Cold Water for Thirsty Mommas - Day 1

October 05, 2014
For the first time in nearly 20 years....I. Don't. Have. A. Preschooler.  Picking out gym shoes and putting a backpack on Ginger has put me in a reflective mood.  It's obvious that she's ready to begin school .....the question is, am I?

The truth is, it's been an awesome run.  I'm incredibly grateful that I have been able to spend these years at home focused on soaking up the first years of my kids' lives.  I have loved being the one who teaches them colors, how to take turns during board games, why it's polite to use a tissue instead of a sleeve and being able to pass on my awesome Thriller dance moves.  It was an intentional choice that Scott and I made, right at the beginning, to order our little world in such a way that I could focus on being a mom.