Adventure sometimes comes when you least expect it.  We plan and schedule and think that we can foresee the tension spots that may prove exciting or challenging, but often the moments we find most challenging are actually the ones we couldn’t see coming.  The way they barge into a moment we thought we had under control is where they get their power.  We can respond in two ways when plans get upended.  Stress can dominate, fear can determine the future and anger can take the place of anticipation.  Or we can choose to live in the knowledge that "Many are the plans in the mind of a man, but it is the purpose of the Lord that will stand." (Prov. 19:21) Who’s plan is most important is really the question our emotions have to face when things don’t go as planned.  If God’s plan will not be thwarted and is our highest goal, then it also becomes our greatest confidence.  Suddenly, there is no problem or struggle that is anything less than a God planned opportunity for His purpose to take center stage.  If the goal of my plans really is to join God in what He is doing, then when I lose the reins is when the adventure really begins  because I know God’s will has taken over.

We lost the reins early into our Thailand trip.  We expected to face the challenges of sleep deprivation and quick layovers….we didn’t’ expect to have a team member denied a boarding pass.  One of our students, Daryl, is a Kenyan citizen and doesn’t travel with an American passport.  We learned at the ticket counter that Kenyans need a visa for travel to Thailand.  The weeks and work prior to the trip had seemed to make it clear that God was sending Daryl, so this seemed like it must be a wrinkle rather than the end of her trip.  Scott began gathering information and making phone calls….while the clock kept ticking towards departure time.  It seemed that there was a good enough chance of being able to get a visa in 24 hours to leave a couple leaders back with Daryl with the hopes that all 3 could leave together the next day and catch up with the team.

Jan, Daryl and I said a quick goodbye to the rest of the team and hurried to the line of taxis waiting outside the airport.  Other than a quick stop at Walgreens for visa photos, we spend 45 long minutes in traffic hoping that the Thai Consulate workers would be staying a few minutes late and would take mercy on us.  The recorded information on their phone line didn’t encourage us.   Usual turn around time on a visa application is 2 days and the hours for accepting applications was 8am-12pm….a time that had long passed for today.   Experience getting visas for other countries didn’t fan the flames of my optimism.   Consulates are notorious for having strict, unbending protocols.  But, my mom always told me that it never hurts to ask for help with a smile on your face.  If you get a “no” at least you know you tried everything you could.

We pulled up 15 minutes after closing time and I raced to the door while Jan and Daryl gathered our suitcases from the taxi.  My mouth fell open in surprise and the door opened in my hands.  That was the first moment that felt like possibility could supplant defeat.  There was music playing down the hallway…..and someone still behind the desk.  He quickly understood our situation assured us that he was willing to stay late to do whatever he could to help us.  He started asking for papers that we dug through Daryl’s bag to provide….and then another obstacle became evident.  Daryl is a legal resident of the US and so has a green card that was needed as part of the application.  Her green card has recently been renewed but the actual id card had not yet come in the mail, just an official letter saying that her green card is current during the time she is waiting for the new one.  She had letter with her, but not her expired id card.  Our Thai friend told us that the expired card was required along with the letter.  So calls were made and options were discussed.  Mr. Consulate suggested having Daryl’s mom email a picture of her card to his personal email account to get the ball rolling on the application and sent me around the corner for a money order to pay the fee.  It started raining as I walked to get the money order and felt good after the heat of the day.

We high-fived when Mr. Consulate told us to go ahead and schedule a new flight for the next afternoon and promised us that a visa would be ready by 11.  Now we just needed to find a hotel nearby, eat dinner and enjoy a good night’s sleep while we waited.  It seemed like the miracle had come almost too easy.

There were plenty of hotels within walking distance, and although we knew they would be a bit more expensive because of the downtown location, it seemed that minimizing expensive taxi rides made it worth staying close to the Consulate.   We gathered our gear, thanked our new Thai friend…and looked outside.  The gentle rain of my earlier walk had given way to a downpour.  After 15 minutes it became obvious that outwaiting it wasn’t an option.  Between the 3 of us we had an umbrella, a poncho and a straw hat and we decided we weren’t afraid of getting a little wet.  Life is an adventure, right??!

Our first stop had one empty room with a price tag of $600.  Back out into the rain we went.  A siren coming from my phone stopped us short….and explained the way the weather kept deteriorating.  We were under a flood warning for the downtown area.  At the next hotel a gathering of people out front in Blackhawks jerseys explained the sold out and expensive rooms.

On our way to our 4th hotel, I looked back to make sure that I hadn’t lost either Daryl or Jan.  We were walking through 5 inches of standing water as we crossed streets and that slowed the suitcase rollers down.  I turned just in time to see a huge wall of water come from a passing car and engulf Daryl and her suitcases.   That’s the moment Jan yelled from the back, “We’re having an adventure!”

We were laughing by the time we made it to the safety of the porch overhang of the next hotel.  Our dripping faces and sad story found mercy.  The $460 room we were first offered was quickly discounted by $150 and then upgraded to a suite and we thankfully took it.

We spent the evening pouring rainwater out of our suitcases, drying clothes and thanking God for His provision.  Daryl’s brother and a friend hopped in the car and drove to Chicago with her green card so she would have it as we reentered the States.  Our travel agent and the airline staff both called us to help and confirm that we would have tickets the next day.  A short 5 hours ago a solution seemed far away and hopeless, until God and the people He placed in our path offered us the help that we needed.

24 hours after we lost the reins, our detour was over and we were on a plane (in upgraded seats!) to reunite with our team.  We learned some lessons along the way about God’s timing and provision.  We also learned a big lesson about our own mindset toward interruptions and delays.   Our friend a the Consulate epitomized the attitude of “Mei Pen Rai – It’s No Trouble” that Mr. & Mrs. Domstad told us we would find in the Thai culture.  He stayed late and answered many more questions for us than his job description required while continually telling us that it was no trouble to do so.  He wasn’t the only person to treat us this way…..the airline staff, the staff at the hotel, our drivers….all of them were happily willing to let our needs delay and redirect their plans.  I hope that we were able to show that same happy willingness toward God as He redirected our day.  We want Him to see a people who trust Him so much that we are convinced that He is always working and it is for our good.  Delays become opportunities, problems become adventures  and life is “My Pen Rai” when we live like God is in control. 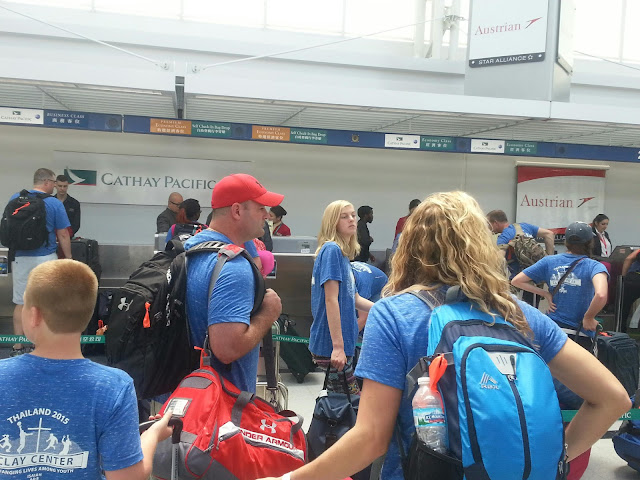 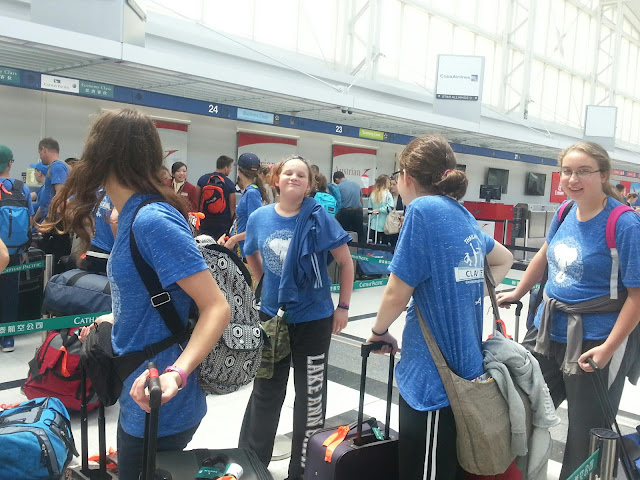 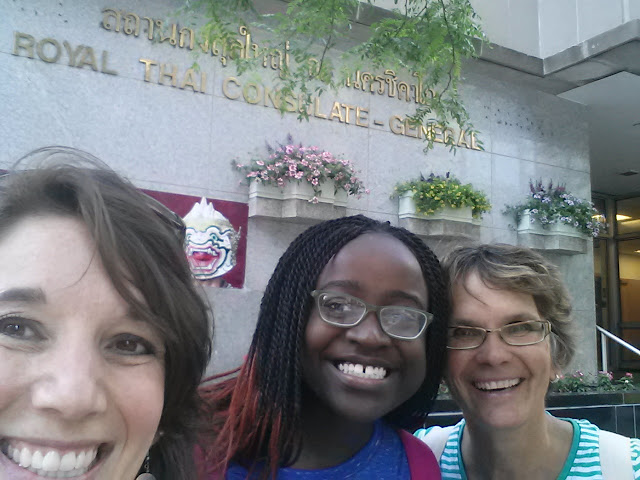 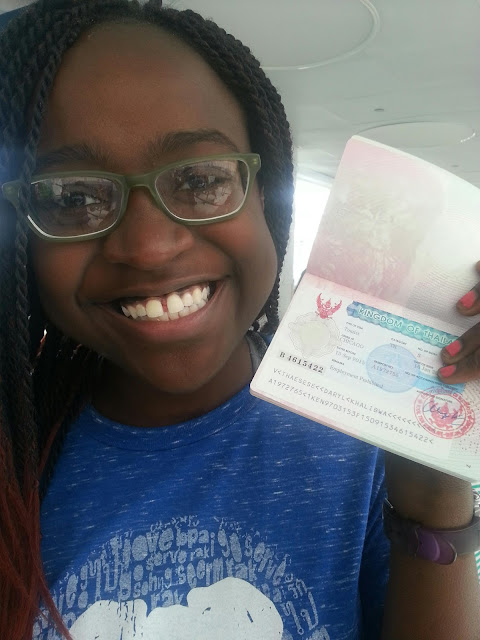