May 24, 2012
There was a girl...who met a boy.  He politely offered a handshake under his nicely feathered hair.  Later that year, in the middle school gym, the girl gulped as she got up her nerve to ask for one of his green polo school pictures.  He gave it with a wish for "good luck with the guys" inscribed upon the back.
A friendship began.  For the next couple years, the message on the back of the school pictures remained the same.  The girl cheered for his team, watched as he folded his warm-ups and politely placed them under his chair, and hoped....and she might admit, schemed a little, to get noticed as more than a friend.
His attention magically fell on her near the beginning of her 16th year...the angels sang and the sunbeams shone.  School pictures from that time on had a new message...one of love and commitment.
School pictures gave way to formal pictures, engagement pictures and finally, 20 years ago, wedding pictures. 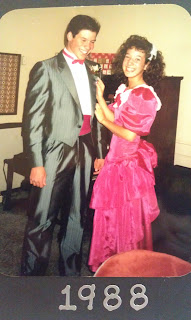 It's felt like a lifetime and a single day all at the same time.  The girl is happy, I am happy.  But not because only happy things have filled our 20 years...but because the things of us have added up to more messages of love and commitment.

Here's my list of 20 things I'm happy are us....the tip of the iceberg of the things that have been the water under our bridge.

Just as I've finished up this last paragraph I've thought of things I should have written that might have meant much more than "I like his bald head."  But I'm going to resist the urge to go back and fix it up all spiritual-like.  I really do like his bald head, and maybe that's meant as much to our 20 years of good memories as anything else, who knows....

The girl and the boy smile a lot, and it leaves lines.  They laugh and sometimes they cry.  They try to look in the eyes when they need to say the hard words of apology.  They keep making plans even though they feel sober about the time that's gone by.  They've become braver, much braver....they might even start to look silly to some people as they learn to lean into God more.  They dream about the generations to come and scheme ways to do lots of grandchildren gifts with just a little dough.  They keep feathering their nest for the new ones to come as they're building a steady launching pad for the ones getting ready to go.  They want to be better together, have stronger hearts and deeper love but still wonder at their ability to really do it.  Above all, they're gonna keep plodding out, watering their own grass and doing whatever it takes to make it the greenest they can see....because they promised 20 years ago....and that means something deep and happy. 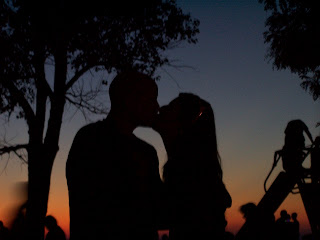